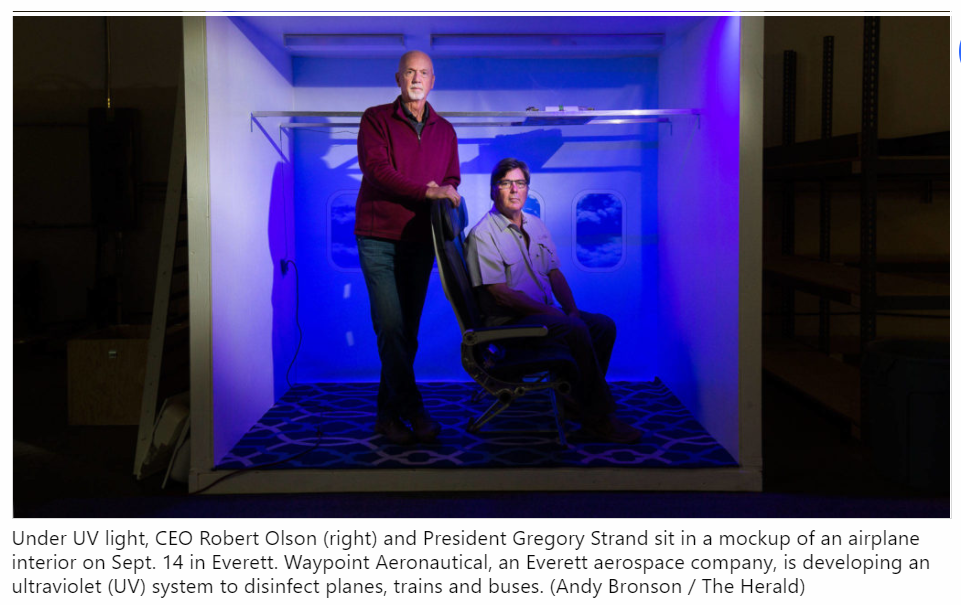 Everett CEO lit up by UV cleaning technology for planes, trains and buses

Just after the Labor Day weekend, U.S. Rep. Rick Larsen paid an announced visit to the modest Everett offices and warehouse complex of Waypoint Aeronautical at Paine Field. Larsen went to visit CEO Bob Olson and get a closer look at the aerospace company’s work to design, develop and manufacture an ultraviolet (UV) light system to disinfect not only airplanes, but also trains and school buses.

Larsen’s interested in Olson’s work because he and another lawmaker have introduced legislation aimed at controlling the spread of Covid-19 during air travel to ensure the safety – and restore public confidence – of passengers and aviation workers.

“We feel the UV light sanitizing technology is the best way to give the traveler the confidence and comfort to get back into the airplane,” Olson told the Business Journal during a recent socially distanced visit to Waypoint to discuss the company’s efforts, origins, the very big competition it faces and what’s next as it works to get its product certified by aviation safety regulators to allow sales.

How did Waypoint get into this area? Waypoint was originally formed, well before Covid, to do quick retrofits of older Boeing 737 jets with new LED lighting systems installed in the cabins. We have also designed an aerial spray system to help control oil spills for the U.K. Coast Guard as part of a five-year program. I became interested in airplane cabin disinfection and sanitization because it seemed like every flu season, I’d get on an airplane, and I’d get the flu. We thought there had to be something we could do.

What is your system and how does it work? Our system is two-part combination system involving lights to sanitize the cabin of bacteria and germs and also disable Covid-19 if it is present.

Explain that. We’re using two lighting systems. The first is a 405-nanometer blue light to kill airborne bacteria, germs and some viruses (transmitted) by breathing, coughing and sneezing. It’s used in hospital rooms very effectively and reduces infections by about 70%. That light can stay on safely all the time while passengers are traveling and work. We’re also using a second system, a 280 UVc light. That one operates only when passengers are not present because it’s dangerous to the eyes and skin. It disables the DNA of viruses like Covid, neutralizing them. We’ve measured the distances between lights and all areas of the seats and handrails and are making sure that the light does not degrade seating materials. We’re hearing complaints from parents about the chemicals being used to fog and disinfect buses. Our UV light system is a clean, green way of disabling viruses.

Is it hard to sell people on the abilities of devices whose work they can’t see? Yes, it’s like selling the Golden Gate Bridge. You’re selling something you can’t see to kill something deadly you also can’t see.

Are you doing this alone? We’re working with Hubbel, the giant lighting company. They loaned us a few of their top scientists for a few months. We’ve set this up to be a long-term product. This thing will clean and sanitize planes, trains, trucks, buses and eliminate whatever comes down the next pathway at us in the future in zoonotic diseases, which are pathogens and infections that jump from animals to humans.

Do you have any potential clients? We have proposals out to several airlines, Sound Transit, as well as several school bus companies and school districts. We’re also talking with several of the large companies that operate fleets of big trucks. They all say they want to do it, but don’t have any money during the pandemic. So, we’re trying to help customers get government money.

How have you stayed afloat during the aviation crisis? We won a $200,000 grant from the Snohomish County First in Flight Fund, which aims to assist tenants like us at Paine Field airport sustain aerospace businesses and operations and keep local residents employed, to support the county’s overall recovery efforts.

What’s next? We’re working to obtain certification from the Federal Aviation Administration to deploy the systems. It may take months or up to a year. We’re halfway through the process and are hoping to be certified by the end of the year. The FAA has put this technology on its priority list because it’s a safety issue.

Both Boeing and Honeywell Aerospace are already making and commercializing competing UV light products. What makes yours better and how will you compete? Our system will work 24/7, and it involves the delivery of carefully measured light that is turned on with a flip of the switch, with the doors closed. It requires no manpower. Because of that, our system is cheaper.

What’s something about you that people would be surprised to know? I delivered the first Boeing 757 jetliner to Shanghai Airlines in China in 1989. That was the same year as the protests and deaths in Tiananmen Square.

This interview has been edited for length and clarity.

WayPoint Interiors’ light-based system may be a serious contender in the battle against coronavirus.

EVERETT — Shining a little light on a problem can not only illuminate it, but — in some cases — disinfect it.

Ultraviolet light has been used to disinfect food, water and hospital surfaces since the early 20th century when Niels Finsen, a Danish scientist and Nobel prize-winner, discovered its germ-killing properties.

Since the COVID-19 pandemic struck, ultraviolet light has become a serious contender in the fight against the coronavirus.

In Everett, WayPoint Interiors, a Paine Field-based aerospace firm, has developed an ultraviolet lighting system that could find a permanent seat on trains, planes and buses.

“We have demonstrators being completed right now, and so we’re prepared to take orders now,” Olson said.

A year ago, the company was searching for new ways to disinfect airplanes, from the cabin areas to the cargo holds.

In its quest, it partnered with Hubbell Lighting, a national lighting and electronics manufacturer.

Together, the two teamed up to design an ultraviolet system to de-germ airplanes.

Since then, WayPoint has helped redesign cockpit doors to meet post 9-11 security standards, modified airplane fuel tanks to make them safer, and worked on other aerospace projects.

Recently, it built an aerial spray system for the British Maritime & Coastguard Agency that can help disperse oil spills on the ocean.

Now, WayPoint has taken up the battle against the bad bugs.

Work began after the company was approached by members of the flight attendants’ union, in search of new ways to improve air quality on airplanes.

It wasn’t hard to sell Olson and the company’s six employees on the idea.

“I’m always looking for ways to clean up the plane in a good way — that’s how I get started,” Olson said.

Employing ultraviolet light to kill germs isn’t new — other companies have developed light wands and delivery systems to do the trick. New LED products have made it possible to produce light more efficiently than incandescent light bulbs, paving the way for new uses.

One ultraviolet light source, a visible “blue light,” can be used to disinfect cabin air during flight, Olson said.

Because it’s safe for humans, it can be turned on while passengers are traveling. Studies show that it’s effective in killing airborne bacteria and some common viruses, Olson said.

A second type of ultraviolet light is powerful enough to kill not only bacteria but viruses, including the coronavirus, studies show.

It does so by disabling the virus’ ability to replicate, rendering it harmless.

However, the more potent ultraviolet light, which is invisible, can only be deployed when the plane is empty. Ultraviolet light that’s strong enough to kill viruses is harmful to humans.

The company is facing some stiff competition — from an army of roving robots.

When the plane is empty, a robot rolls up and down the aisles flooding the cabin with germ-killing ultraviolet light.

Here’s where WayPoint’s ultraviolet system differs — it can be permanently installed on a plane, train or bus, Olson said.

When the vehicle is empty, it can be activated with the flip of a switch. The system includes a string of red lights to let everyone know the circuit is on — for safety, Olson said.

“Only the mechanic on the ground has the switch,” Olson said, so that it can’t be turned on accidentally while people are still aboard.

The Federal Aviation Administration has a high interest in the program. “We’re being scrutinized and helped by the FAA’s medical division,” Olson said.

Across the U.S., travel rates have declined dramatically, “up to 90% for some modes of transportation,” Olson said.

“People are afraid,” Olson said. “Everyone is looking for ways to clean up these environments — with chemicals, wipes, shields and UV robots.”

The company is in talks with transportation companies, commuter bus and rail systems and school districts.

“We’re also talking to them about installing these on school buses,” Olson said.